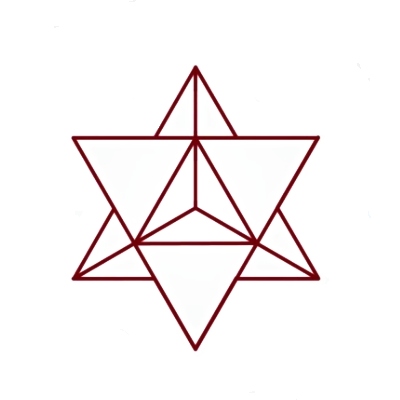 For me the concept of the merkabah is something I felt, something I knew, but without the whole left brain explanation that goes with! That’s not easy for this arrogant human to admit. If you know something you know it, right? You should be able to articulate it, explain it, cite sources and references, and who you learned from!

The idea of a physical beaded merkabah representation, as a piece of wearable art jewelry, first came to my awareness because I was asked if I could create one. I immediately said yes – because I knew I could, because I knew what it was. In order to write this piece I had to do some researching about what the merkabah is believed to be by others, the esoteric community generally, and to provide a ‘suitable’ explanation. I hope that what follows by way of resources/references/citations are useful for you and might tempt you to owning an expression of your own.

I found a post by Teal Swan and am very grateful for a clear and concise article. Excerpts here with full credit to her, link above, full citation and gratitude for the depth of her knowledge. If you are interested in understanding more fully I urge you to go read her full length piece. I’ll start with the name – see note below. “The merkabah made its major debut in human consciousness before Jesus, amongst those who practiced early Jewish mysticism. It showed up in their visions. They began calling it merkabah, which means ‘to ride’ or ‘thing to ride in’ depending on its usage.” “…thought to be a divine light vehicle (a spiritual space ship of sorts) that transported people from one dimension to another and thus enabled people to access, connect with and communicate with beings of other dimensions.” “Here’s the problem; human beings began to think that the merkabah was a pre requisite for ‘ascension’. It is not; it is the result of ascension. Ascension is nothing more than the process of altering your perspective to a perspective that takes in more of an objective point of view of the universe we live in and of life itself.” “You cannot activate the merkabah so that the merkabah itself can assist you to reach other dimensions or ascend. Instead, the merkabah ‘activates’ on it’s own as a result of shifting consciousness. It is a symptom of increasing the vibration of consciousness, not a cause of increasing consciousness. The merkabah ‘becomes alive’. And it becoming alive, means the energy field of a person reflects the fact that they have developed a pattern of consciousness that enables their perspective to be unrestricted by the limitations of the vibrational density of the physical dimension.” Thank you Teal Swan for this down to earth explanation.

What is the shape The merkabah is a star tetrahedron pattern made up of 2, 3 sided pyramid shapes interlocked, forming 8 points. A field of light forms as the two pyramids spin in opposite directions, “pulling power up from the earth (feminine) and drawing energy down from the heavens (masculine).“(1) I believe the balancing of masculine and feminine energies, earth & cosmos, to be one of my primary goals on this journey, so the merkabah has great meaning for me. I believe this is why the opportunity to build/make a physical representation came my way. 3-dimentional forms can be created by sewing different bead shapes and sizes together (usually peyote stitch). Multiple attempts allowed me to generate two different, and I hope pleasing, merkabah reflections. I added stones/crystals so their munificent properties are inside the potent mix for the realization of your own merkabah. I continue to create and modify them to act as reminders of our potential. Feel free to call or text if you would like a custom creation. 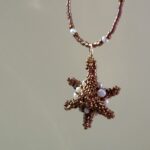 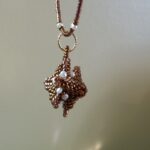 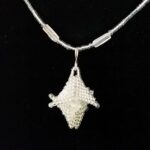 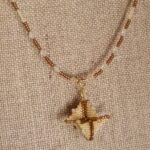 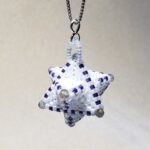 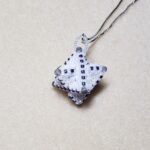 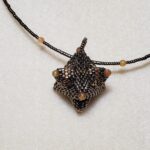 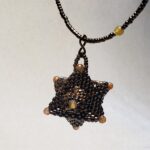 This shape is one of many classed as Sacred Geometry, symbols to help focus on personal development toward enlightenment, well being, and higher consciousness. The Sacred Geometry link is to my gallery page for a few other beaded items that came to my awareness to make. The whole subject of scared geometry is fascinating and begs for a a future blog post.

Note: The name Merkabah has different spellings due to language translation. Merkaba, Merkavah are two most common. I found other sources that say “The word Merkaba comes from a Hebrew word which means “chariot”, & when broken down phonetically means “light, body, spirit” from an ancient Egyptian translation.” (1) & this “‘Mer’ means Light. ‘Ka’ means Spirit. ‘Ba” means Body. It links the mind, spirit, and body to produce the Merkaba effect, an energy field that allows for enlightenment. It is said that it is the divine light path used by ascended masters to connect with and reach those in tune with the higher realms.” (2)

Get new blogs via Email