Stitches – Peyote. Neither the serious nor hallucinogenic kind. The needle & thread with fabric & beads kind. Though some of my beady friend are actually very serious about their fabric & beads I try to be lighter and to divert my perfectionist tendencies away from their bone & creativity crushing onerousness!

I don’t know if it’s THE oldest bead stitch in the world but it has been around for a long time. There are ancient Egyptian artifacts showing examples of this stitch and the various Egyptian civilizations are all BC. As far as I know it derives the its name from the Native American use of the beads/stitch in make ceremonial objects and decorating regalia made for their sacred Peyote rituals.

It’s classified as an off-loom bead-weaving stitch & was the first bead stitch I learned. It is foundational to much of my work as it is tremendously versatile. It comes in a number of forms; flat, circular & tubular. To my mind it looks “perfect” when using Delica beads though I regularly use 11° & 15° rocailles & even two hole beads like superduos.

You’ve seen all these before – thought side by side might be illuminating. 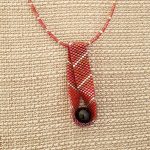 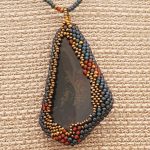 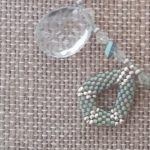 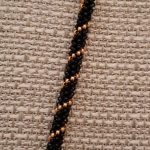 Get new blogs via Email